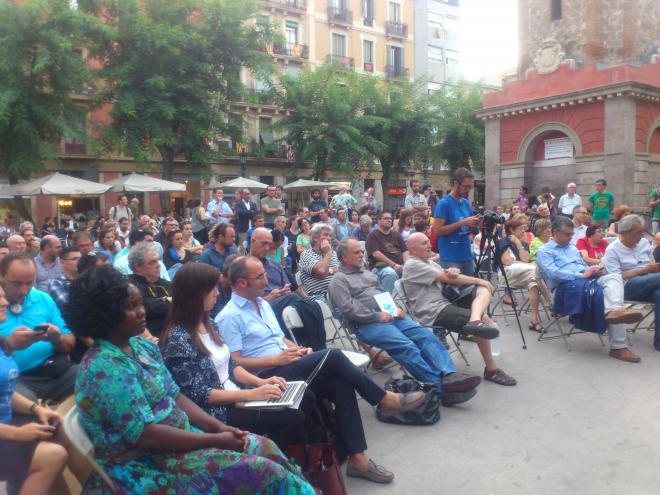 Public water operators and social movements from 90 countries gathered in Barcelona in mid-September to reflect on how to consolidate a public model of water provision and how to address critical issues of financing clean water for all.

The city of Barcelona was an apt venue for the third Global Congress of Global Water Operators Partnerships Alliance (GWOPA) that gathered in the city from September 16 to 18th. In May 2015, the citizens alliance, Barcelona en Comú (Barcelona in Common), won the city as a result of a new form of coalition politics created by engaged citizens based on principles of direct democracy, solidarity and the defence of the common goods.

In the space of a few months, Barcelona’s new government has imposed fines on banks that own empty buildings, re-opened public day-care centres and declared the city free of TTIP (Transatlantic Trade and Investment Partnership. This new spirit is reflected in the global water movement. In recent years 235 cities from 35 countries have taken back water management into public hands, establishing a global trend towards remunicipalisation. Paradigmatic cases such as in Paris, Berlin and Jakarta pointed out the failure of the private sector to provide basic access to water and sanitation. In many other cities the question is not whether remunicipalisation is an option, but how and when to implement it and under which model of democratic control.

As a result the 3rd GWOPA conference very much reflected this new-found confidence and sense of political renovation. 400 participants  from more than 90 countries attended the conference hosted by UN-Habitat. Public water operators are the main actors in GWOPA, however some private water operators, civil society organizations, labour unions and financial partners also engage as alliance members. The over-arching theme of this year’s congress was the Sustainable Development Goals (SDGs): how water and sanitation operators can play a major role in their implementation. GWOPA is a unique space where public water operators and local authorities can exchange experiences, share practices and plan common strategies. It is also the main venue to develop Water Operators’ Partnerships (WOPs); which contribute to SDGs by fostering capacity building and transfer of knowhow. In contrast to traditional commercial arrangements such as Public-Private Partnerships (PPP), WOPs strictly exclude a profit-making motive and is instead embedded in values of solidarity and mutual benefit to achieve universal access to water. As a result GWOPA has become strategic for the development of a global public ethos.

The growth of urban populations, mostly in informal and unplanned settlements that are difficult to serve, is a major challenge for countries in the Global South. For instance, only 10% of the population in Lagos in (Nigeria) has access to piped water. In a city of almost 20 million people this leads to increasing social tensions and instability. Similar cases are found elsewhere. Water Operators’ Partnerships (WOP) therefore have enormous potential to help state water companies such as that in Lagos.

The first was a dialogue about remunicipalisation with the elected officials of Barcelona en Comú (which aims to municipalise not only water and sanitation but also energy utilities), as well as other elected Catalan public officials, and civil society organisations.  Eloi Badia, a long-term activist opposing  privatisation in Barcelona and now a newly elected as a city council from Barcelona en Comú explained that 10 to 15 per cent of the Barcelona population have difficulty paying their water bills. At the same time 50 per cent of the water charges are unrelated to water production costs. He explained that the private service provider passes on through user fees the cost of paying off the fine it receives from the City for failing to lower water losses as its contract stipulates.

The event was followed by a public debate (organised in a square and illustrating the current personality of city politics) that included the launch of the Catalan edition of ´Our Public Water Future: global experience with remunicipalisation´.

The speakers noted that private management is not best placed to deal with long-term issues due to its dependence on short-term return of investment. This means for example that it is not very good at planning for climate change impacts. As Célia Blauel, president of Eau de Paris (the re-municipalised water operator) put it: “We have differences with the private sector, we are not pipes managers. We tackle the problems of 21 century; we have a long term vision.”

Discussion at the Congress was particularly focused on the SDGs,  agreed by the UN this year that sets  2030 goals. The indicators, which include a goal (SDG 6) to “ensure availability and sustainable management of water and sanitation for all”, will have great implications in the shaping of the global efforts and policies to eradicate poverty and inequality. Civil society representatives at GWOPA strongly asserted that SDGs cannot focus only on outcomes (such as pipes and meters), but also on processes like public participation in decision-making. How to finance water and sanitation was another main subject of debate. Public water operators frequently face challenges to find financial resources to upgrade or build new infrastructure and tend to be pressured into or convinced to tap private finance. Financial institutions persistently say water projects should be ´bankable´. Civil society representatives at the Congress warned of the dangers of leaving financing to the private sector, given that short-term high returns are unrealistic in water sector, and therefore private financing often makes water projects socially and environmentally unsustainable. While some advocates of  private financing at GWOPA pointed to  successful development of the telecommunications sector globally as a model, others such as David Boys (Deputy General Secretary of Public Services International) explained it was a mistake to consider water as the same as other services: “Water is a common good, not a normal good. Therefore you cannot apply the same economic models.”

There was a strong assertion at the Congress that public water operators have a shared duty to provide a basic human need to the populations they serve that go beyond cost-effective considerations. In many countries, this still requires strong resistance to forces pushing for privatisation. Greece, for example, is under enormous pressure to privatise its major public companies. The last Memorandum of Understanding between the Troika  (the European Commission, European Central Bank and the IMF) and the Greek government attempts to privatise water utilities, seeking to override the ruling of the Greek Constitution Court that declared it unconstitutional. The Thessaloniki water utility has so far resisted the pressure. . George Archontopoulos (President of the trade union in Thessaloniki) explained: “In Greece there is a system that gives free water to poor families. National law sets the threshold at 2,500 euros  income per year. We set it at 8000 euros. It is a good support for the population. Yet the Troika keeps pushing for privatisation.”

While the private sector persists in a vision based on profit, public Water Operators, local authorities with political commitment, organised civil society and communities have demonstrated that they can walk together to realise human right to water. This alliance has successfully confronted the so far hegemonic coalition of multinational corporations and biased development agencies and national governments and is at the heart of a growing citizens revolution returning water to public control. The challenge now is to sustain the momentum. GWOPA must remain a space where those defending public, democratic, and sustainable provision of water and sanitation strengthen their capacity to tackle the colossal challenges ahead.