Despite large aid support, Ghana’s privatised water utility AVRL consistently failed to meet its contractual commitments.  Water is now back in state hands,  but it will need increased investment and a vigilant civil society to deliver the services Ghanaians need.

Ghana finally yielded to pressure from multilateral donors in 2006 and privatised its urban water utilities. The Government’s experiment with what it conveniently referred to as “private sector participation”, and not privatisation, was short-lived. This was despite considerable high hopes and expectations fostered by the Ghanaian media as well as very well-resourced backers and promoters of privatisation. The road between 2006 and 2011 was bumpy for the new management. The period after 2011, after water returned to the public sector, has also not been smooth. However it has highlighted the cost and key challenges that confront a public/state facilitator and provider of urban water within the context and constraints of a developing country.

The economic context before privatisation in Ghana was similar to most African countries in the 1980s and 1990s. These economies were characterised by high trade deficits due to a decline in prices of exports and a surge in the prices of imports, with resulting high budget deficits. This made it impossible for such countries to provide needed support to vital state-owned enterprises, and there was a consequential decline in the efficiency of such enterprises.

Particularly in Ghana, there was pressure from the International Monetary Fund and the World Bank for fiscal discipline. The intention was to keep the government from investing in state-owned enterprises (SOEs) and supporting them to weather the economic storms of the time. The prescription was to rather leave such roles for the private sector. Whether such private sector actors existed in Ghana at the time and were willing to take the risk were issues that did not receive much attention. This did not prevent a vigorous push by donors requiring the government to privatise, for example, the urban water and energy sectors[1] in exchange for economic assistance

This pressure led Ghana to open up its urban water sector to private ‘capital’ in 2006. The government’s original offer of a lease concession was not successful with previously interested bidders saying a lease involved too high risk in relation to political stability in West Africa and the large liabilities of the Ghana Water and Sewage Corporation among others.[2]

The truth was, however, that they had wanted to pay very little. Their concern about stability was not so much about stability of West Africa, but more about the wider stability and sustainability of water privatization contracts globally. On the continent and elsewhere in Latin America, similar contracts had been overthrown and were a major cause of uneasiness for the bidders for the Ghana contract.[3]

As a result private sector actors sought an arrangement that could allow the private sector to participate in urban water supply in Ghana without being required to make any direct investment.[4] The Government therefore contracted Aqua Vitens Rand Limited (AVRL), a company formed by Vitens Evides International of the Netherlands and Rand Water of South Africa. The company was paid USD 5 million as management fees for five years. Additionally, they administered donor support to the contract of USD 120 million for non-infrastructural work with huge cost overruns.

A close study of the contract shows how much it privileged AVRL above the state.  The contract was clear about the obligations of the Ghana Water Company Limited and very general about the obligations of AVRL.[5] The road became bumpy for AVRL because of the contradictions in the contract, particularly the arrangement where the private actor invested nothing financially and was given guaranteed returns before any performance.

The effect of this was that shortly after the signing of the contract, AVRL had to contend with the high expectations of workers seconded to it, as well as expectations of citizens who had been told of the efficiencies of AVRL. With no new investments by the new actors, AVRL faced similar challenges to those that the Ghana Water Company Limited faced: poor conditions of work for workers and irregular water availability for most citizens.

In the end, AVRL failed consistently throughout the contract period to meet its targets. Some of the significant failures included inability to reduce non-revenue water[6], inability to improve water quality, and consistently poor performance in six other target areas identified in a World Bank commissioned technical audit report.[7] These facts, in addition to the unmet expectations of citizens and workers of the company, created the conditions for the contract to be discontinued.

The same media that was instrumental in getting the public to accept AVRL became the ally of citizens and the workers in forcing them out. In June 2011, the management contract with AVRL was discontinued. However, operations did not return directly to the Ghana Water Company Limited as expected, but passed to an interim structure that the government named the Ghana Urban Water Company Limited. Some activists believed the World Bank (opposed to discontinuation despite the evidence) influenced this process. There was therefore a deadlock situation for about two years, after which pressure from civil society ensured a full reversion to the public company, Ghana Water Company Limited.

Currently, the urban water sector is fully owned by the state and is managed centrally by the Ghana Water Company Limited through its regional and district offices. It retains both production and distribution functions.

Unfortunately the improved performance expected by citizens has not yet materialized and signs of poor water supply are everywhere and increasing. Water is still fetched and stored in yellow 25 litre gallon containers in most communities.

One cannot blame the Ghana Water Company Limited entirely for the present difficulties. The five years of dormancy in which they were placed during the management contract was enough to affect their momentum and rob them of continuity from their past experience.

Another publicly run water utility, the Uganda Water and Sewerage Corporation, offers a useful point of comparison. It was spared this hiatus and had reforms that did not bring in new managers but rather corrected what was wrong within the public corporation. The Uganda Water and Sewage Corporation is today celebrated as a successful case. It even now offers assistance to other countries, like Ghana, learning from the challenges it had.

Influence of Uganda – The promise and dangers of PuPs

Uganda’s experience, was one in which the water utility was highly corporatised. This process has been prone to sacrifice access for efficiency. A case in point is the introduction in Uganda of prepaid water metres to increase revenue collection efficiency. Under the public-public mentorship by Uganda, the Ghana Water Company Limited announced a similar policy in February 2014.[8] Intense public reaction and revulsion caused the policy to be halted, though not abandoned. Meanwhile, public investments into expanding infrastructure has improved relatively. Such investments mean that the capital city Accra’s current capacity of 93 million gallons[9] a day will increase to 158.3 million gallons by the end of 2014. This will provide 8.3 million gallons in excess of current demand.[10]

Though the increase in capacity would improve access, the Ghana Water Company Limited is looking for ways to avoid using public (tax) finance to fund its operations. This makes citizens the sole source of cost recovery, with poor areas and people being the most vulnerable. This was behind attempts to introduce the pre-paid water metering in  Ghana.

What the Ghana-Uganda partnership shows is that in the absence of a vigilant civil society, even a state company will sacrifice the common social objectives for profit objectives. Civil society therefore has an obligation to expose this discriminatory public policy and to mobilise public support behind the social objectives that should equally inform water supply to make safe water available for both rich and poor.

[2] Citizen, Public (2002).Water for All. “Report on the international fact-finding mission on water sector reform in Ghana”. Washington D.C: Public Citizen/Water for All.

[4]  Citizen, Public (2002).Water for All .“Report on the international fact-finding mission on water sector reform in Ghana”. Washington D.C.: Public Citizen/Water for All.

[6] Non revenue water (NRW) is water that has been produced and is “lost” before it reaches the customer. Losses can be real losses (through leaks, sometimes also referred to as physical losses) or apparent losses (for example through theft or metering inaccuracies).

Article - Remunicipalisation in Berlin after the buy-back 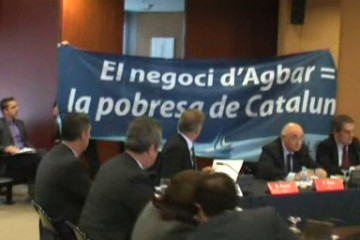